A GRIM year is forecast for much of Queensland after the latest figures from the Australian Bureau of Statistics reveal building approvals have dropped again, with the green shoots of recovery seen during 2018 officially gone.

According to Master Builders Deputy CEO, Paul Bidwell, this figure is in stark contrast to the peak of 52,000 approvals in August 2016 and is a strong signal that building and construction will travel a rocky road during 2019.

“Despite a strong start to last year, approvals for detached houses have taken a turn for the worse, declining in the second half of 2018 and ending 6 per cent down on the previous 12 months,” Mr Bidwell said.

“The figures also reveal that the slide in unit approvals has slowed, and are down 4 per cent when compared to the previous 12 months.

“Regional areas outside South-East Queensland are certainly bearing the brunt, with regional figures dropping to just 5,714 over the past 12 months, which is the lowest in over 15 years and since the current regional data reporting commenced.

“These figures don’t bode well for regional Queensland in 2019, which is shaping up to be a tough year all round for residential construction.”

With the exception of the Gold Coast and Mackay, all regions have recorded a drop in approvals over the 12-month period. Central Queensland and North Queensland are the hardest hit regions, with 45 per cent and 39 per cent drops respectively over the year. Although, with the current flood disaster, it is anticipated the local North Queensland industry will be kept busy with flood repair work for some time to come.

Cairns and Downs & Western have less severe reported drops, while Brisbane, Gold Coast and the Sunshine Coast have remained relatively stable. Mackay has bucked the trend over the 12-month period, although the positive numbers here are an adjustment after years of record low approvals.

“With such extensive drops and a grim forecast, it’s never been more important to identify measures for stimulating demand, particularly within the residential sector,” explains Mr Bidwell.

“Government expenditure on capital projects is one thing, but we desperately need to increase demand for residential construction. A good first start is to bring back the Boost for the First Home Owners' Grant in regional Queensland. The data has shown that the Boost works and any stimulation in these areas will be welcome.

“We also strongly urge the government to consider this challenging outlook when making any further policy decisions. Our industry is already grappling with the implementation of a number of additional reforms in 2019.” 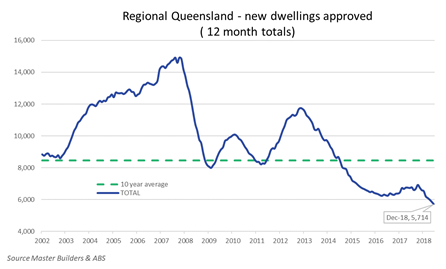