Perfect storm hitting builders – but there is a silver lining

THE number of new homes being approved across Queensland has plummeted – but the pipeline of work remains strong as builders ride the wave of demand boosted by government stimulus, and negotiate the inevitable trade and material shortages that have risen as a result.

With the 31 March deadline looming for the end of the HomeBuilder and Regional Home Building boost grants, the latest ABS Regional building approvals figures have revealed an anticipated softening in numbers for new homes.

Despite an overall drop in approvals for Queensland during January, the Gold Coast region led the way with a massive 89 per cent surge in the previous three months, largely due to a consecutive spike in multi-unit approvals, up a staggering 330 per cent. The Downs & Western region backed up a strong jump last quarter with a 78 per cent hike in dwelling approvals, while growth also remained steady in Wide Bay Burnett at 19 per cent.

North Queensland remained in the black with a 7 per cent rise, while Greater Brisbane just held on with 3,930 houses and 1,419 multi-unit dwellings getting the green light, pulling off a 1 per cent hike.

The Sunshine Coast was the region hardest hit by the downturn in the same three-month period, with approvals there plunging 30 per cent, while previous front runner Far North Queensland slipped into the red, dropping 11 per cent. Central Queensland (down 8 per cent) and the Mackay & Whitsunday region (down 2 per cent) also took a dive.

Despite the figures, Master Builders Deputy CEO Paul Bidwell said the easing won’t put a dampener on the industry, with the pipeline of work set to carry it through well into 2022.

“HomeBuilder and the Regional Home building boost grant provided a lifeline for our industry, stopping it falling off a cliff when the pandemic hit, and boosting confidence in the residential market. It has definitely performed the part it was intended to play,” Mr Bidwell said.

“On the flipside, that strong demand combined with a number of other factors has led to a perfect storm for builders. We’re hearing growing reports of a shortage of trades and materials, which in turn are causing delays and increased prices, particularly on timber and steel.

“While these shortages seem to be exacerbated in Brisbane off the back of events including last year’s Halloween storm at Springfield Lakes, we’re now being told the problem is spreading to the Gold Coast and Sunshine Coast regions, and while the issues are different, regional Queensland is also not immune.

“The industry is managing the situation for now, but we are monitoring it closely – and builders, particularly the smaller businesses, can’t absorb the price hikes forever.”

However, Mr Bidwell said there is potentially a silver lining.

“We’re working with insurers and government on possible solutions for overcoming these issues.

“While there’s been some suggestion that putting the brakes on non-essential insurance work could be the answer, we believe changes to the contractual process could be a solid option.

“This would give builders more flexibility to use Extension of Time provisions in their contracts in genuine and reasonable circumstances.” 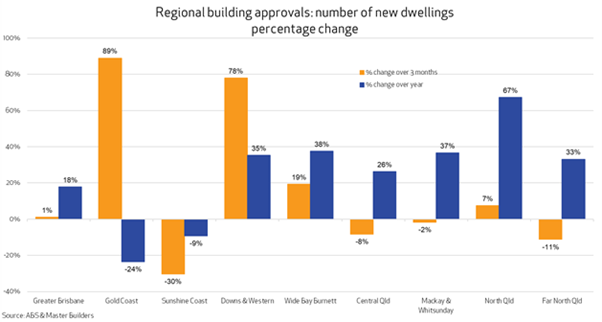