Residential building industry back in black for 2021, as commercial sector sees red

CONFIDENCE remains high among Queensland residential builders for a strong pipeline of work through to the end of 2021 and beyond, with the industry on track to build almost 30,000 new dwellings.

The December ABS Building Approvals confirm the HomeBuilder and Regional Home Building boost grants, both extended until 31 March, have prompted a remarkable turnaround across all Queensland regions.

The Downs & Western region has bounced back in the last three months, with dwelling approvals skyrocketing by 121 per cent. The growth in approvals of new multi-unit dwellings on the Gold Coast boosted the region’s total to 76 per cent, while Mackay & Whitsunday (56 per cent) and North Queensland (51 per cent) remained strong performers.

The Sunshine Coast also enjoyed a solid 27 per cent increase over the quarter, followed by Central Queensland at 17 per cent; while Greater Brisbane saw 5,867 houses and multi-unit dwellings approved – a 15 per cent jump. Previous front runner Far North Queensland also remained in the black, growing by 14 per cent.

“Close to 30,000 new dwellings are expected to be built in Queensland during 2021 – this is almost 60 per cent more than we projected back in April 2020, before government stimulus came into play,” Mr Bidwell said.

“Casting our minds back to last year in the grips of COVID lockdown – when we were predicting our industry was set to fall off a cliff – who could have imagined this is where we would be now?

“In fact, things are going so well, we’re concerned about emerging problems with trade shortages, price hikes, and labour and materials.

“Beyond the government grants, there are other factors driving demand. Loans to owner-occupiers for new home construction are the highest on record, buoyed by record low interest rates – and our state has also gained the highest number of new residents from interstate migration as people seek out sea and tree changes.”

While the 2021 new homes forecast is better than expected, it’s still down 3 per cent on the previous year, and a far cry from the 50,000 commencements in 2016 (of which more than half were units).

Mr Bidwell said the outlook for non-residential building activity is less promising, with a forecast plunge of 25.6 per cent since the high in 2019 – falling to $6.9 billion.

“The Palaszczuk government has committed to spending $56 billion on capital projects over the next four years – $14.8 billion of that to be spent in 2021 - but we still don’t have the breakdown on building as opposed to civil projects.

“It’s not really until 2022/23 that we expect the retail and commercial sectors to bounce back.” 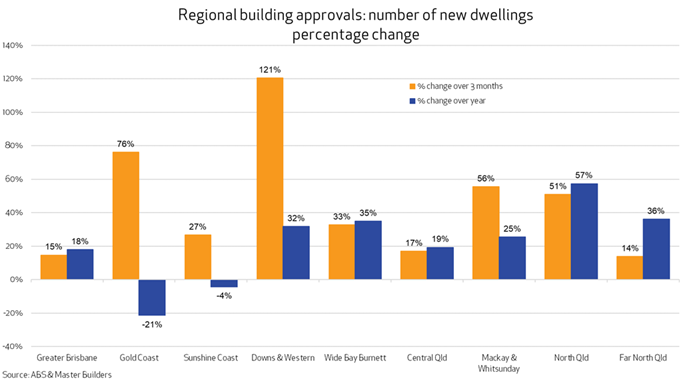